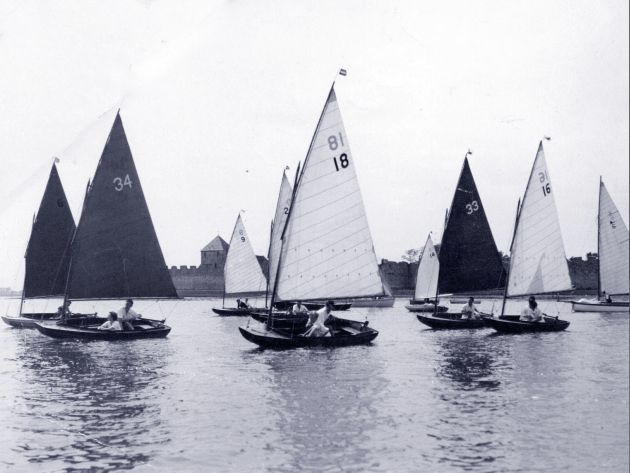 By 1934 membership stood at 90, at which time the joining fee was 5 shillings. The Ducks were raced regularly until the outbreak of the war in 1939. In 1945 the Club was flourishing again and a search was made for a floating Clubhouse to be positioned beside the slipway. In 1951 Cdr. Hamond himself presented the Club with a 70ft landing craft, which was to be the Clubhouse for the next 17 years. In 1964 members of the Portchester Sea Angling Club agreed to amalgamate with the Club, leading to the formation of the current Angling Section.

By 1965 plans had been drawn up to build a Clubhouse on piles on the foreshore. Fortunately at this time the 250 year old house, known as The Old Vicarage, came on the market. After many months the purchase was completed in December 1968. The Club was granted a council loan that was conditional on the Club carrying out many expensive repairs, such as solid floors, retiling, and double-skinned walls. By then the Club had spent £15,000. We were helped by a Sports Council grant that enabled us to build an extended lounge on the seaward end of the building. One room was converted into a bar and the stable was refurbished for use by all the members and for storing the anglers' equipment. In 1970 members constructed a dolphin for scrubbing off and for lifting masts. In 1980 a pier was built, again by members, which reached as far as half tide.

1983 saw another milestone in the evolution of the Club, The design and construction of a large lounge with a superb view of the creek. Throughout the post-war years the dinghy fleet has flourished with regular racing for 505s, National 12s, Fireballs, Mirrors, Toppers, Lasers, RS400s, RS600s and currently a strong fleet of National Solos. Racing and Rallying in Company is a favourite activity for the cruisers. The Club provides favourable facilities for the Portchester Sea Scouts. The mooring area accommodates approximately 170 moorings for a variety of yachts.

When Port Solent was built in 1985 the Club gave up 40 swinging moorings in order to provide access to the marina. These have been replaced by 40 pile mooring spaces on the edge of the channel that is periodically dredged. By using a boat lifter or a tractor the Club provides winter storage for approximately 95 cruisers.

In 2017-18 the Club completely refurbished the internal aspect of the old 'Vicarage' part of the Clubhouse.